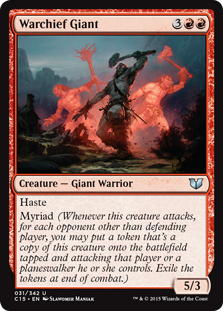 Myriad (Whenever this creature attacks, for each opponent other than defending player, you may create a token that’s a copy of this creature that’s tapped and attacking that player or a planeswalker they control. Exile the tokens at end of combat.)

From the Magic The Gathering set Commander 2015

Comparing several retailers of Magic The Gathering single cards we have found that this Uncommon card from Commander 2015 is worth around £0.20 though that depends on condition, if is a foil or borderless art and if there are other cards from other series called Warchief Giant. Though we are doing all we can to present correct data please check with the retailer for final availability, price and any shipping costs.