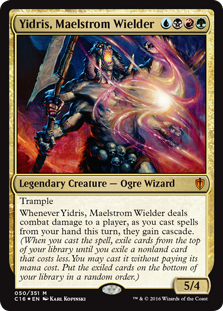 Whenever Yidris, Maelstrom Wielder deals combat damage to a player, as you cast spells from your hand this turn, they gain cascade. (When you cast the spell, exile cards from the top of your library until you exile a nonland card that costs less. You may cast it without paying its mana cost. Put the exiled cards on the bottom of your library in a random order.)

From the Magic The Gathering set Commander 2016

Comparing several retailers of Magic The Gathering single cards we have found that this Mythic Rare card from Commander 2016 is worth around £4.99 though that depends on condition, if is a foil or borderless art and if there are other cards from other series called Yidris, Maelstrom Wielder. Though we are doing all we can to present correct data please check with the retailer for final availability, price and any shipping costs.